When God created man and woman, He never gave them a RELIGION to follow.

God’s intention was to have a RELATIONSHIP with them.

But, when they disobeyed Him and sinned, that precious RELATIONSHIP was broken.

Man tried to repair that RELATIONSHIP through their own human attempts. They thought they could cover up their sins by their self-efforts. THAT was how RELIGION began ~ man’s futile attempts at trying to get back to the original RELATIONSHIP with God.

Instead of accepting their “good works” of creating a covering made of leaves to hide their sin and shame, God rejected it and He Himself gave them animal skins as covering.

Think. Where did that animal skin come from? An animal had to die.

Now, Adam and Eve had a choice. They could accept what God provided as their covering or they could choose their own useless self-help methods.

Why did Jesus Christ come?

That animal that was sacrificed for Adam & Eve, only covered their sin and shame temporarily so they could be acceptable to God.

When Jesus came, as the Ultimate Sacrifice for the whole world, not only did He cover sins permanently by taking it upon himself, He now could restore that original RELATIONSHIP for man with God!

Today, you and I have a choice to make just like Adam and Eve.

A) You could choose your own human methods and good works to cover up your nakedness with the “Leaves of RELIGION.”

B) Choose God’s Way of wiping out your sins once and for all, through the sacrifice of the Lamb of God, Jesus Christ so that you regain that RELATIONSHIP with God that HE originally intended for us to have with Him. 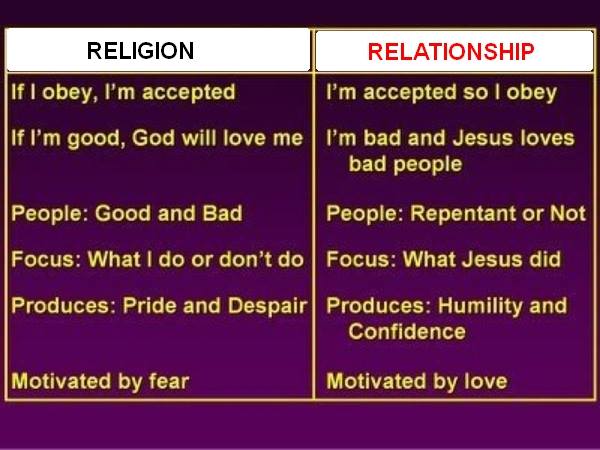 What is your RELATIONSHP with God?

SLAVES only have leaves covering their nakedness. On the Day of Judgement, you will be stripped naked of the leaves and will have no where to hide from the wrath of God, since you willfully rejected the covering He Himself provided for you.

SONS have a RELATIONSHIP with the Father because Jesus Himself provided that covering that God accepts.

Jesus said, “I am the way and the truth and the life. No one comes to the Father except through me.” John 14:6

“So you are no longer a slave, but a son; and since you are a son, you are also an heir through God.” Galatians 4:7

With his own blood–not the blood of goats and calves–he entered the Most Holy Place once for all time and secured our redemption forever. (Hebrews 9:12)

“He became the source of eternal salvation to all who obey Him” (Hebrews 5:9)

“Whoever believes in the Son has eternal life, but whoever rejects the Son will not see life, for God’s wrath remains on them.” (John 3:36)

Do We Have The Same God?