The Bible teaches us that Jesus Christ died and then rose again to life and then ascended to heaven.

The Quran says that He did not die but ascended straight to heaven.

Which version is true?

Let’s assume that the Quran is right and Jesus did not die.

Why did the apostles and followers of Jesus make up such an outrageous story?  Were they crazy or stupid?

If they were intending to spread the message of Jesus, why not just tell the truth that He was simply taken up to heaven? Wasn’t this a miracle in itself? Why didn’t they just say that? Why would they make up a different story?

Why concoct a tale of a dead man coming back to life? Who would believe such nonsense if they intended to create a movement of new followers?

Did Peter, James, John and the others wake up one day after Jesus had ascended to heaven and decide to betray the Master they loved in order to start a new false religion? Did they lose their minds?

They create a story about Jesus dying and coming back to life.  And then decide that a woman was to be the first witness to the resurrection of Jesus.  Do you think this makes sense? It was an age where women were not seen as credible or reliable witnesses. No one would even accept the testimony of woman!  And this particular woman, by the way, had a shady past! Were the disciples that stupid? This would not have been the way to go about creating a lie and persuading people to join them!

Wouldn’t it make more sense to have a few credible, reliable male witnesses? To make the case stronger, you would get a couple of unbiased, neutral third-party witnesses as well to corroborate the events. That would be the the way to do it.

How did they benefit from inventing such a lie? Did they become rich and powerful? Did they head a powerful army and set out to conquer and plunder and enrich themselves with slaves and camels? Did they accumulate a dozen wives to fulfill all their fantasies?

On the contrary, almost every one of them died as martyrs for their faith!

Let me get this straight. They invent a fake story but they died protecting their lies when the authorities of the day tried to wipe them out?

In 44 AD, just 10 years after Jesus had ascended to heaven, James, one of the leaders of the apostles, and elder brother of John, was arrested by King Herod and faced execution for being part of this new movement. All he had to do was deny Jesus and would have been allowed to go free by the Romans.

Acts 12:1-3
About that time Herod the king laid violent hands on some who belonged to the church. He killed James the brother of John with the sword, and when he saw that it pleased the Jews, he proceeded to arrest Peter also. …..And when he had seized him, he put him in prison, delivering him over to four squads of soldiers to guard him, intending after the Passover to bring him out to the people. So Peter was kept in prison, but earnest prayer for him was made to God by the church.”

Also wouldn’t this have been the right time for John and all the rest apostles to finally own up and say, “OK, this has gone on too far. We really didn’t expect it to come to this. It’s all over. It was all a lie. We didn’t think this through. We made everything up.  Now please let our brothers Peter and James go.”

No.
Herod had James beheaded. But that didn’t stop the others from continuing to preach their message everywhere they went until the day they were killed for their faith.
Andrew went to Greece, and was crucified there.
Matthew was murdered while praying in Ethiopia.
Thomas preached in India and was speared to death.
Peter was crucified upside down because he deemed that he was not worthy to die in the same way as his master. 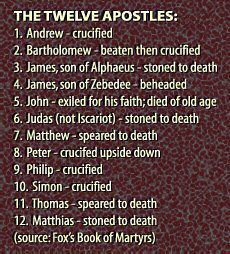 Would any sane person die for what they knew was a lie that they themselves had invented?

Not only that, thousands of Christians were martyred over the next 300 years under the rule of 10 Roman Emperors, from Nero to Diocletian.

Polycarp, who was the disciple of John, when threatened with being burnt to death if he does not deny Jesus and blaspheme His name, said this:

“86 years have I have served him, and he has done me no wrong. How can I blaspheme my King and my Savior?” 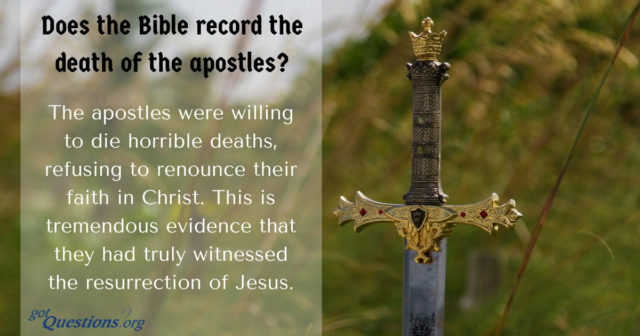