In Sura 10:38, we find a similar challenge to prove the authenticity of the Quran.

Or do they say: “He (Muhammad SAW) has forged it?” Say: “Bring then a Surah (chapter) like unto it, and call upon whomsoever you can, besides Allah, if you are truthful!”

Allah is challenging anyone to step up and produce a chapter similar to a chapter in the Quran. Muslims boast that no one has ever met this challenge for 1400 years. They believe the eloquence of the Quran is unmatched.

First of all, eloquence is not evidence of truth. Someone can write a lie very beautifully. No matter how beautiful it is, it still a lie.

Second of all, eloquence is not evidence of divine inspiration. Allah seems to be making this assumption in issuing this challenge.

[Side Note: It is interesting that in the very next Sura, in 11:13, Allah seems to have developed cold feet about his initial challenge because now he asks for ten surahs instead of one! (If the claim was that no one can bring even one, why ask for ten?)
Or they say, “He (Prophet Muhammad SAW) forged it (the Quran).” Say: “Bring you then ten forged Surah (chapters) like unto it, and call whomsoever you can, other than Allah (to your help), if you speak the truth!”]

Think about it. Allah is basically saying, “I can write better than you!” That’s not only embarrassing but a shallow challenge not befitting an omnipotent eternal creator of the universe. Sounds more like an arrogant kid in the school playground!

The argument depends on subjective human judgement. This is not a particularly independent, objective or reliable basis for an argument.

Since there is no clear standard to meet, it is all too easy for apologists to move the goalposts according to their whim and fancies. Depending upon the different opinions of many muslims, the exact meaning of “surah like it” varies greatly. Some say it has to be eloquent and stylish like Quran, some say it must be in Arabic, some say other languages are acceptable, some say the verses should match the exact grammatical rules of Quran, some say verses must have to be meaningful, others say verses should not sound like that of soothsayers or pre-islamic poetry etc. What exactly is the criteria for judging?

The Quran may be distinctive but so are all other books ever written. The distinctiveness of the Quran does not automatically imply a divine origin. Just calling this one book “special” commits the Texas sharpshooter fallacy. All books are unique just like each person is different and unique. You can’t find two people alike. No two fingerprints are alike, no two voices are alike, no two minds are alike, etc.

Let’s say, someone does produce a sura to meet this challenge. What happens next? Who’s going to judge? Obviously, only the author of the Quran is qualified to judge if it is worthy of one of his surahs. Is Allah up for the task?

Muslims will say, “Well, we have judges and jurists who can do it.” Who are they? What are their names? What is their qualification to judge? Are they biased? If this judge already believes that no one can produce a surah, then this whole surah challenge is a sham.

How do you quantify such a challenge? Basically, the challenge seems to be a popularity contest or an opinion poll. If I am the judge, then I will say that these newly composed surahs are better than the Quran. If an Islamist is the judge then, of course, these new verses are blasphemy and nothing but gutter works. So, how are we going to come to a decision?

Besides, claiming that a human is worthy to judge a surah is equivalent to saying this human is equally worthy to judge even the surahs of the Quran! Otherwise, how can he judge any surahs at all? And if this human judge knows the criteria to evaluate and is qualified to judge a surah, then he must be equally capable of producing a surah like it! If he cannot, then he is not qualified to judge any surah.

Coming back to that KFC challenge, who’s going to judge? Of course, the folks at KFC will. It’s their challenge, their rules, and what they say goes. You can cook up the most tender, tastiest chicken and still you will never meet their “standard.” Your chicken may even be more delicious, but sorry, you just don’t have their “secret herbs and spices.”

Allah’s “produce a sura like it” challenge is like this KFC challenge except that KFC in this case would stand for Koran’s Feeble Challenge.

Surat Ad-Du’a (“The Prayer”)
And when the disciples said to Christ:
O our Lord teach us a prayer that pleases the Lord of the worlds. (1)
(wa idh kalal hawari’yoona lil-maseehi rabbana allimna salatan turdee
rabbal alameen)

He said, so lift your hearts toward heaven
and do not reiterate the words (do not be loquacious) like the hypocrites. (2)
(kala farfa’oo ilal alya’ee kuloobakum wala tukarrirul kalama
kalmunafikeen)

It is He who made of you spiritual children for Him
when He breathed into your chests granting you a spirit of your own
so devote yourselves to him with reverence. (3)
(huwal ladhi sawakumu bir-roohi abna’an lahoo idh nafakha min roohihi fi
sudoorikum roohan lakum faknutoo lahu khashi’een)

On earth as it is in heaven, at all times and all places. (6)
(kama fissama’ee kadhalika ala ardi fi kulli makanen wafi kulli heen)

Our Lord, and lead us not into temptation;
Against the devil thine aid we truly seek. (9)
(Rabbana wala tudkhilna fi tajrubaten inna alashirriri bika nasta’een)

And make mention of the disciples in the Book, when the wind blew
while they were sailing at night. (1)

And then it appeared to them seeing the phantom of Christ walking on the
water. They said: Is He our Lord deriding us or have we gone insane? (2)

And there came the voice of the Master announcing to them:
Do not fear, It is I, Don’t you see. (3)

Hence, one of them shouted and asked: My Lord, order me, if you
were He, to walk toward you on the water, So God may convert my
doubt to certitude. (4)

He {The Lord) said to him, come toward me and be a miracle for man
that they may remember. (5)

And as the disciple began to walk, he saw how strong the wind was
so he became afraid and began to drown. Thus he yelled asking his
lord to help. (6)

And He {The Lord} extended His hand to him and took him with it and
said: Oh you who has little faith, such is the reward of those who
doubt. (7)

And as soon as He went on the ship with him the wind calmed down and
the disciples thanked Him with praise and shouted and said: (8)

You are truly the Son of God; in you we believed and in front of you
we kneel. (9)

He said: Joy is for those who believed without mixing their faith
with a doubt for those are truly the successful. (10)

Surat Al-Muslimoon
(1) Alef Lam Saad Meem
(2) Say: O Muslims, You are far astray.
(3) Those who disbelieved in God and his Christ
shall have in the lifeafter the fire of hell
and a severe torture.
(4) Some faces that day will be subdued and darkened
seeking forgiveness from God
and God shall do whatever He wants.
(5) That day, the Most Merciful shall say:
O my servants I favored you with my guidance
revealed to you in the Torah and the Injeel.
(6) And you should have not disbelieved
what I have revealed to you
and go astray from a plain road.
(7) They said: We did not go astray ourselves
but he, who claimed he was one of the messengers (of God)
has mislead us.
(8) And as God says: O Muhammad, you allured my servants
and caused them to become disbelievers.
(9) He said: O my Lord, it is Satan who allured me and truly
he has always been the most corrupting to children of Adam.
(10) And God will forgive those
who have been allured by man and then repented
and he will compel that one who was Satan’s advocate to hell,
a hapless journey’s end.
(11) And if God rules something, He is most knowing of what He rules
and of what He had ruled and He is able to do all things. 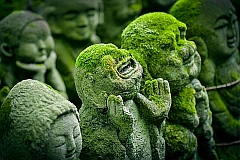