One night, Muhammad rode on his flying al-buraq, a half-human, half ass/donkey/mule, from Mecca to Jerusalem. 800 miles away.

He claimed to have prayed in the mosque there before riding on to “heaven” to meet Allah.

Can Muslims tell me the name of the mosque he visited in Jerusalem during his pit-stop? 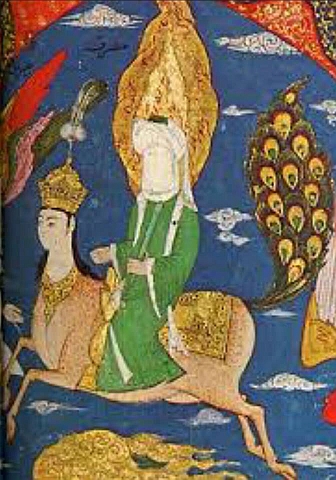 Surah 17.1 “Glory to (Allah) Who did take His servant for a Journey by night from the Sacred Mosque to the farthest Mosque, whose precincts We did bless,- in order that We might show him some of Our Signs: for He is the One Who heareth and seeth (all things).”

Historical records tell us that no mosque existed there until it was built in 691AD by Caliph Abd al-Malik. But Muhammad died in 632AD.

Was Muhammad hallucinating? Was it a dream? What mosque did he visit when there was no mosque there?

You have no answer? Let me help you.

Muslims scholars all tell us that the mosque Muhammad and his buraq went to was the Masjid al-Aqsa.

According to every historical record: Al-Aqsa was built in 691 AD by the Umayyad Caliph Abd al-Malik and finished by his son al-Walid in 705 AD.

Muhammad had been dead for 60 years! He never saw the mosque, he had never heard the mosque in his lifetime.

So how did this story of his magical mysterious mystical night journey on a flying ass/donkey/mule and his visit to Masjid al-Aqsa come about?

Wrong again. The temple of Jerusalem was completely destroyed by the Roman in 70 AD.  The site was literally made a huge dumping ground for garbage for hundreds of years, including during Muhammad’s entire lifetime right to his death. So it was impossible for Muhammad to have visited it.

Muslims conquered Jerusalem in 637AD.  Five years after Muhammad’s death. The caliph of the time, Umar, went to the site and saw there was nothing but garbage there.

This is serious.  Was the night ride a hoax? Was it a legend made up by Abd Al-Malik in honor of the new mosque he built and inserted in the Quran?

Where Do Islamic Rituals Come From?

Who Is The Real Mary, Miriam, Mariam?